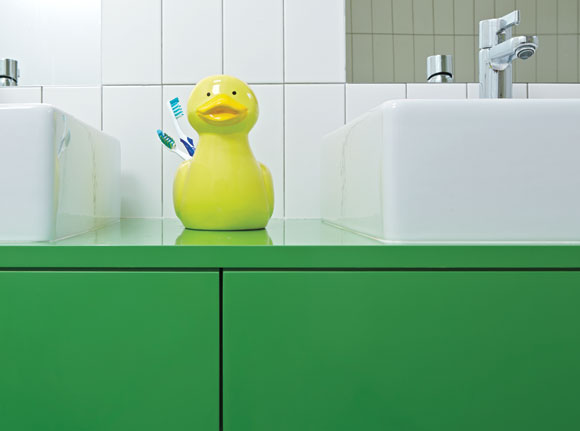 Moving from Toronto to Palo Alto, California, together with her family, Heather Finlay toured a 1973 post-and-beam house by the prestigious modernist developer Joseph Eichler, who died in 1974. “I fell in love with it right away,” she says. The open plan meant that, from almost any room, she could watch her four teenagers playing inside the yard. And the cathedral ceiling and skylights made the two,300-square-foot interior light and airy, “so different from
anything in Canada.”

In fact, she and her husband, Jonathan Lister, decided the home needs to be even brighter, both to celebrate its disco-era roots and to integrate the brightly colored kids’ possessions that always appeared to take over—an if-you-can’t-beat-’em-join-’em attitude. So YamaMar Design was commissioned to update the kitchen and baths and to put in oak floorboards with radiant heating, among other improvements.

“I know Eichler fanatics would possibly not approve,” Finlay says. But Yama understood her decision: “While respecting the house’s bones, we brought it right into a new period.”

The color burst came courtesy of Alison Damonte Design. Whatever options the firm presented, Finlay always chose the foremost adventurous among them. Take the fuchsia-and-silver wall covering patterned with outlines of rainbows, stars, private airplanes, and muscle cars. It’s within the powder room, dubbed “the disco bathroom” by Finlay. “That’s how I knew she was different,” Damonte says. “Very confident in her taste.”

Once there has been a powerful fuchsia element, there needed to be others inside the pink-purple family—an open plan demands continuity, as Damonte points out. Hence the similarly colored acrylic pendant dome, over the kitchen table, and wool-silk rug, anchoring the living area. Within the kids’ bathroom, the palette changes to confess apple green and sunny yellow. Eichler couldn’t be reached for comment. 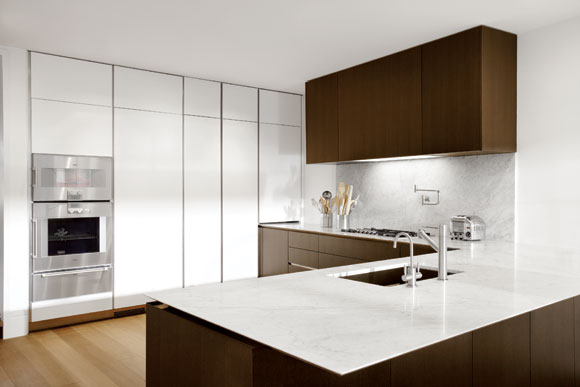 It was a big affair for Nicole Hollis. The entire first year was spent waiting by the telephone. Then, after the San Francisco couple who’d bought this 1906 Tudor-style row house finally got around to calling her, they were slow to commit. “It was simply to seek furniture,” she says. one other year in, the plan changed radically. No way could the house’s small, dark rooms provide the sunlight the couple hoped for. Not without demolition and rebuilding. So her firm, styled NicoleHollis, brought in Dumican Mosey Architects.

“We hadn’t worked with Nicole before, but we knew her by reputation,” Matthew Mosey says. The starting point for the 5,900-square-foot collaboration was to reorganize each level around an off-center staircase, its floating steel-and-glass form replacing circuitous wooden stairs. Mosey then built a glass bridge at the top and capped everything with a skylight.

Of the house’s four levels, the second is dedicated to public spaces—with the kitchen right within the middle, flanked by the living area and the dining room. The third level is given over entirely to the master suite, which includes not only its own full bathroom, complete with separate WC, but also an office that has a bathroom with a shower. At the highest of the house, a casual penthouse lounge is all about the San Francisco Bay view, enhanced by a wet bar.

Hollis kept finishes consistent and restrained. Flooring is limestone slabs within the three bathrooms and one powder room—and gray-stained oak planks elsewhere. Carrara marble appears with knife-edge detailing on counters within the kitchen and lavatories. The similar marble is used for the surround of the master bath’s whirlpool tub and the brand new mantelpiece for the dining room’s existing fireplace. Cabinetry is ebonized oak. Walls are unfailingly white. 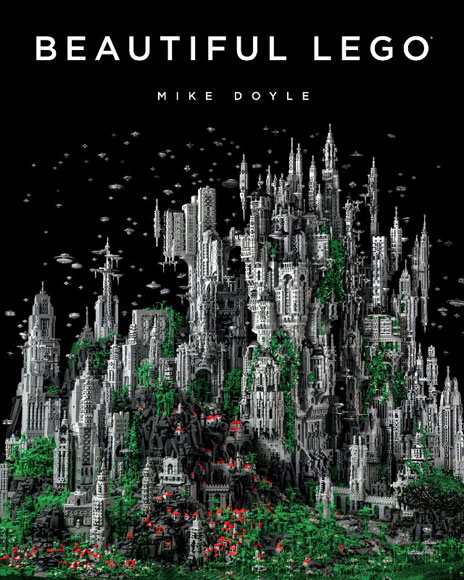 We all know Lego are fun to play with. But perhaps less familiar is that the plastic blocks became a creative medium. Flip through 280 pages of such works in Beautiful LEGO, a compendium of color photographs and artist interviews by Mike Doyle, who himself is a Lego-ist; his jaw-dropping cityscape, composed of greater than 200,000 bricks, dons the duvet. The book, coming in September from No Starch Press, features 79 artists and 360 creations, Angus MacLane’s Lincoln, MisaQa’s Snail, and Chris McVeigh’s Hello among them.

Images reproduced from Beautiful LEGO with the permission of No Starch Press. © 2013 by Mike Doyle. 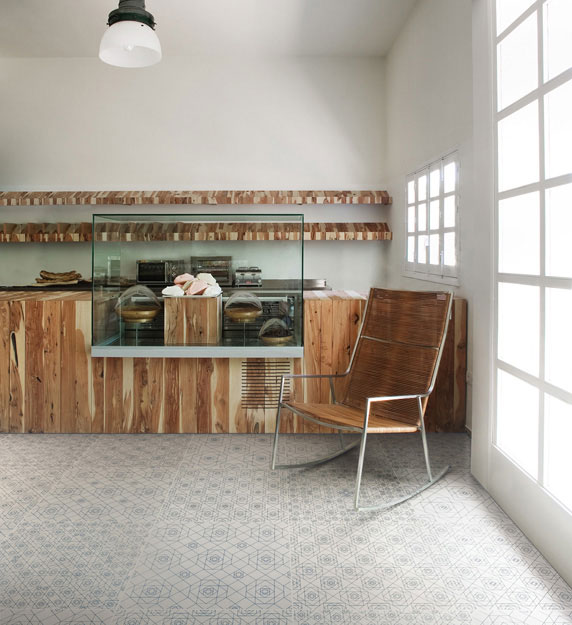 <<Back to main article

Studio FM Milano has made its name in Italy and world wide with graphic design and art direction in fields starting from corporate identity to exhibit and book design. But if the studio, which was founded by Barbara Forni and Sergio Menichelli in 1996 and joined by Cristiano Bottino in 2000, was approached by Italian ceramics manufacturer Refin, they saw a brand new opportunity to use their experience to an architectural surface which had of their minds seen a steep and disappointing decline in its decorative potential.

“The communication function of adornment has thus moved in keeping with a monochrome vision of huge surfaces, renouncing its own ability to create a dialogue with spaces and folk, to the benefit of the furnishing items,” write the designers within the brief in their new ceramic tile collection, Frame.

With the goal of reinterpreting traditional painted ceramics “without falling into the trap of historical falsity or banal citation,” the studio started to research the ornamental crafts of Sassuolo, an industrial center in Italy’s Emilia-Romagna region. They based the collection’s themes on research of traditional 19th- and 20th-century Majolica and marble-chip tiles, then broadened concepts to incorporate a broader geographic scope; the gathering of 4 patterns represents inspiration starting from the Bauhaus and Giò Ponti’s work to azulejo, a kind of Mediterranean painted and tin-glazed ceramic tile-making, and shibori, a Japanese approach to textile dying.

As a result, the Frame collection’s product families represent unique tactile qualities with four designs: Geometric, Majolica, Carpet, and Weave. Variation inside the traditional scale of every pattern and reinterpretations of historic color palettes lent the designers the modernity they desired—one on the way to inevitably translate right into a dynamic change within the role of today’s ceramic surfaces. 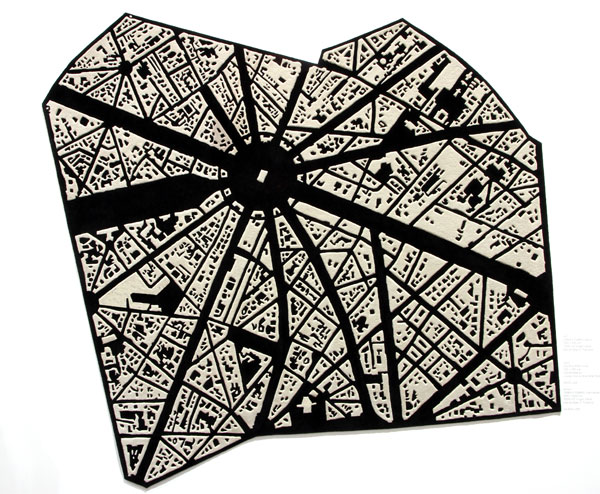 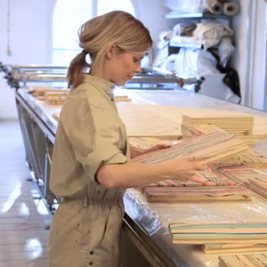 Pernille Snedker Hansen, founding father of Copenhagen-based Snedker Studio, was developing her own tackle the method of surface marbeling with ink by creating wooden flooring with the identical characteristics as marbled paper.
>>Ones to observe: Snedker Studio 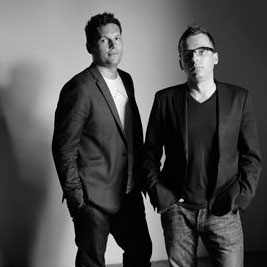 When Studio FM Milano was approached by Italian ceramics manufacturer Refin, they saw a brand new opportunity to use their experience to an architectural surface which had of their minds seen a steep and disappointing decline in its decorative potential.

Welcome to Home Nav, a blog for home and garden. Search and find ideas and trends for interior and exterior design.